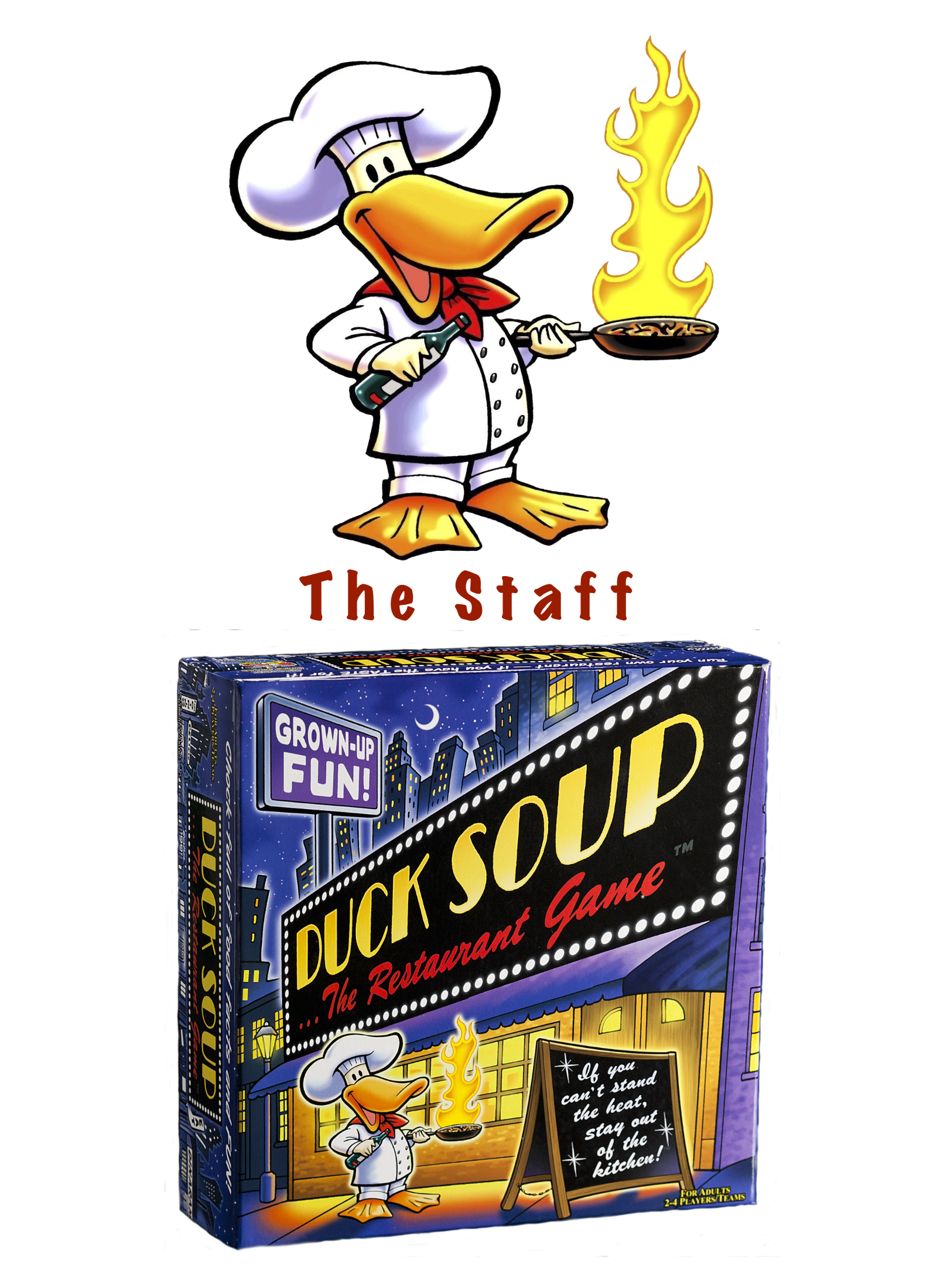 My oldest brother, Bill, who was the executive chef of my restaurant, was also a graphic artist. He supplied the first graphics and it was originally decided to make the images as humans. Note that the Wine Steward would become the Sommelier and the Waiter would become the Server. The Chef was a self-made caricature of Bill.

And then there were two

As we progressed with the game’s development, Bill backed out from producing any more graphics. The game was being driven by my other brother Martin and me, and Bill lacked the interest or desire to continue. It wasn’t easy for three brothers to work on a project that we sort of knew what we wanted. Ironically, we had no issues working together in a fast-paced restaurant.

This is when Tina, as noted in the previous post in this series “The Idea Takes Shape – Part 1,” stepped up and began creating the graphics.

Tina was a part-time graphic artist, and she welcomed the opportunity to work on the project. Her patience was instrumental in the progress. It was also when we switched the staff from human to cartoon although this was temporary.

We need an iconic character

While we pondered the various staff, a main character was needed that showcased the game’s name and was still a cartoon caricature with some sass. Tina provided us with one using a soup bowl that we used as a stepping stone.

Okay, where do we start?

We knew that eventually we’d require a professional artist to take the graphics to the next level. Tina was aware of our intentions and understood. We needed to test play using the eye candy that artwork provides. It made the continual game-playing more enjoyable.

Categories and number of staff

The categories and number of staff was the first hurdle. We couldn’t have too many staff, but we needed to create a proper representation of staffing an upscale restaurant. This was not easy and eventually we just had to keep it simple while representing the required staff.

We could have argued this forever. Finally, we decided on 12 total staff. We also knew that there could be blowback on the classifications and numbers, but it was our game to create. There were no bar staff which may have been an oversight in reflection.

Visuals are so important in board games

The graphics are taken to the next level

After some years of game playing and realizing that the final version was on the cusp, we were ready to take the next step of utilizing the talents of a professional graphic artist. Larry Jones Illustrations was contracted to do the graphics. Martin had found him online.

He initially provided us with an array of looks for the character icon. This was when we realized that we made the right choice of illustrator.

The setting was changed from a soup bowl after we decided to use the statement “If you can’t stand the heat, stay out of the kitchen.” A flaming pan with a sassy duck was the look we were after.

It was also when Larry got involved that we switched back to human staff characters. The graphics he provided made us realize that this was a positive move. As this was an adult board game, this was a smart decision.

With the graphics coming together, we could now concentrate on fine-tuning the game play.