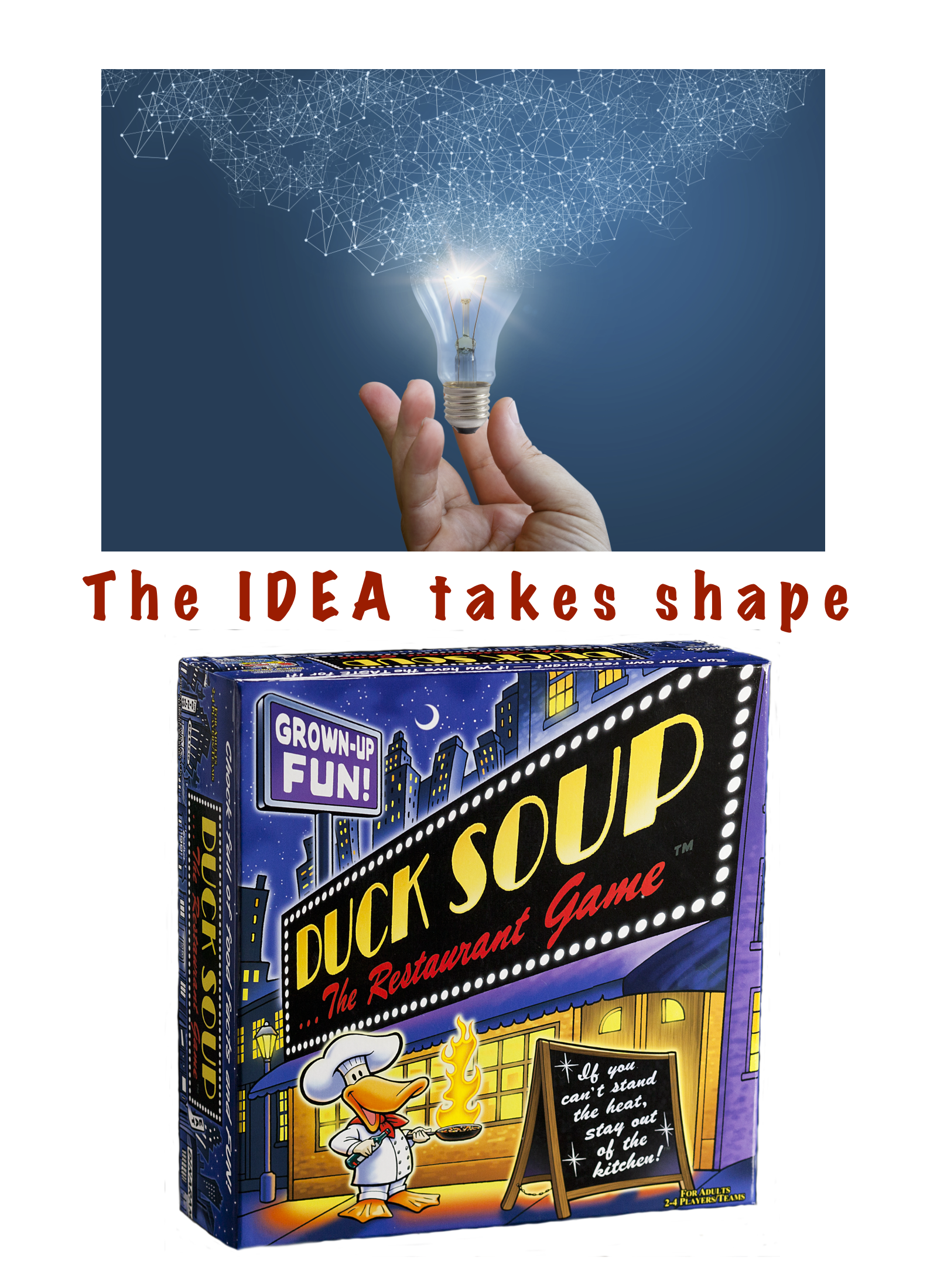 What do you do when you hit a wall in the restaurant business? Well, you create a board game about it. This is Part 1 of the series. There will be 5 posts, maybe 6.

This isn’t a joke

I’m not joking as that’s what we did. Actually, it wasn’t my idea in the first place.  My oldest brother Bill was the executive chef at my restaurant and after a particularly stressful lunch, he blurted out, “Someone should make a board game about this crazy business!” The seed was planted.

This may take some time and lots of thought

It was my other brother Martin, the kitchen manager, and I who decided to take the plunge and create this board game about the restaurant business. Bill was also a graphic artist and provided the initial artwork, but he didn’t want to wade in any further after a couple of years. There wasn’t a lifeguard and he wasn’t comfortable swimming in these gaming waters.

A close friend’s wife (Tina) was a graphic artist and she provided the artwork now that Bill had bailed on the project.

Despite what anyone might say, board games are not something that can be slapped together. A good game requires more details and structure than you can ever imagine.

We worked on it a bit, here and there, and many years later we had DUCK SOUP…The Restaurant Game. It took over 25 years to complete. In the meantime, we worked full-time jobs so we could live and pay the rent.

Okay, where do we start?

A name would be good

We were going to need a name, and trademark and copyright considerations restricted what we could use. The name Duck Soup came to me while watching movies late one Sunday night. Thanks to the Marx Brothers. We didn’t know it at the time, but our father pointed out the slang meaning as noted here and we knew then that it was more than fitting for a title.

How will all this play out?

Playability is the key to any board game. Extensive attention to the rules, squares, graphics, components, and playability isn’t easy to get right. There are so many layers to creating a game.  Where do you start? What is the premise of the game? Finishing a game can’t take too long or be too quick. Game design fundamentals are particularly detailed. Every possible scenario must be considered. And it should be fun as well as competitive. The goal of determining a winner is the first task.

We decided that staff are the key to success, not just in the restaurant business. Thus, the goal was to replace all Average staff with Excellent staff. A full complement of staff, no matter what, was still required. It seemed logical. The quality & talent of this dynamic group, though, remains priority one.

How do we keep track?

As in most endeavours, a quantified tracking is required such as currency. The game’s currency is called Duckats (we weren’t trying to be cute) and earning them requires correctly answering questions on a wide variety of culinary and restaurant topics. Obviously players who are more knowledgeable have an advantage in the world of food, drink, and service. Not to intimidate anyone, the questions are either true or false OR multiple choice, so players always choose an answer.

Duckats are used to acquire staff or pay for costly scenarios, such as equipment repairs. And there are Souper Duckats that allow players to advance along the board to either go to a good square or avoid a bad square.

The board squares are the first hurdle

The most difficult element was the board itself, at least until we had to grapple with the rules. The number and variety of squares, and what occurs when a player lands on each one, are the backbone of play. We knew that these original squares that Tina, Martin & I created would be replaced by a professional graphic artist, but this “eye candy” was still a stimulant when testing the playability over and over again.

More on the board and the squares in a future post (Part 3) in this series.

Getting Excellent staff remained the focus

The focus on squares rested with the gain & loss of Excellent staff. Then we added some typical scenarios that occur in the restaurant business. Some were conditional rewards based on the number of Excellent staff and others were unexpected costs.

There was always the potential for staff to quit or get hired/stolen by other restaurant players. This would reflect the actual foodservice industry. The more Excellent staff a player had, the better the conditional situations although players had more staff that could be stolen or quit. Precarious to say the least.

Who are these Average & Excellent staff?

Now we needed to determine the number/breakdown of staff and create the graphics of the Average & Excellent staff.

The next post in this series: DUCK SOUP, THE RESTAURANT BOARD GAME Series – The Staff – Part 2.