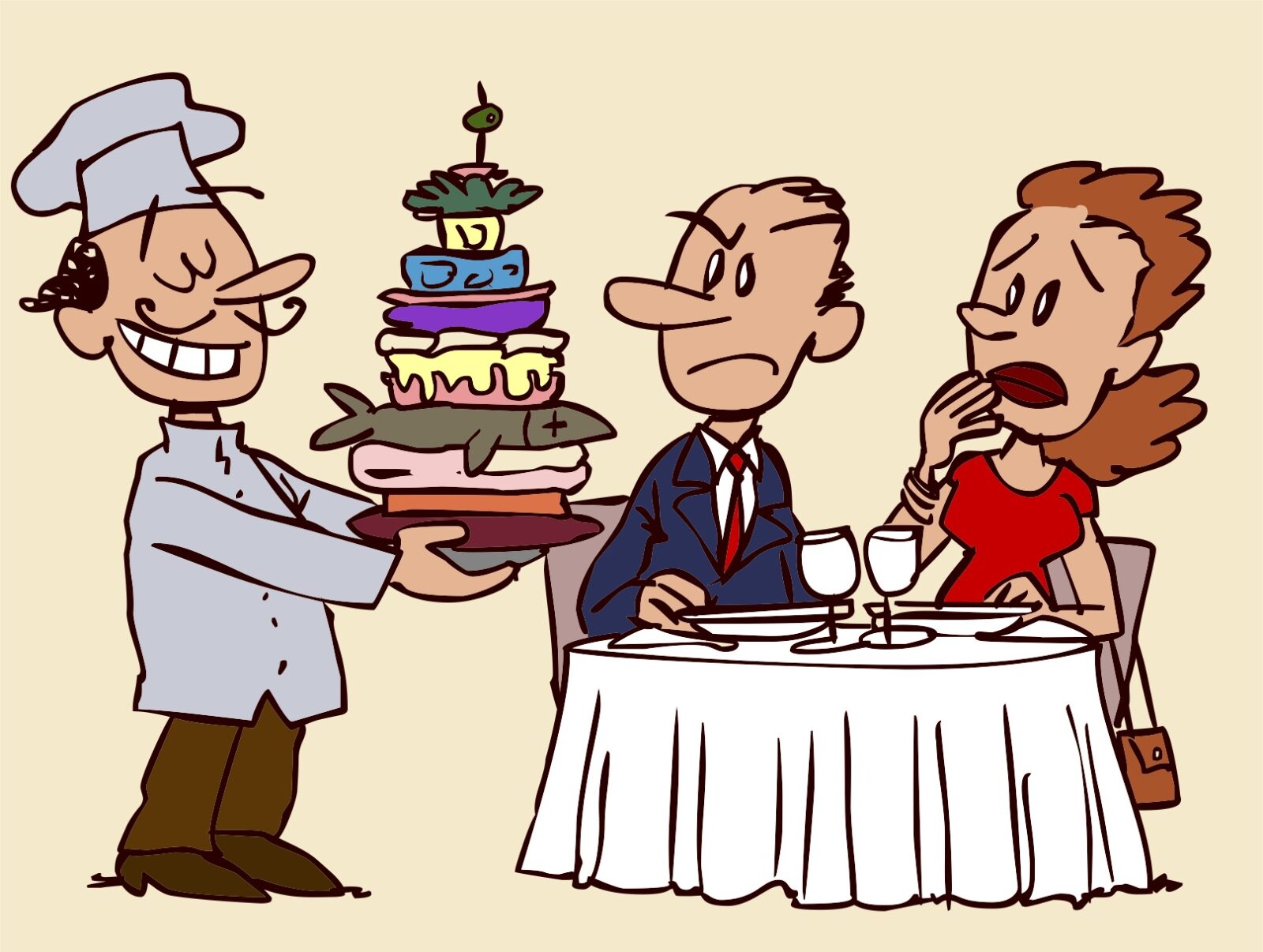 Usually, a dining experience that is bizarre revolves around the poor food quality or inferior service that is so beyond the norm. Mistakes happen when hundreds of meals are prepared and served daily, and at times the blunder is unforgettable.

What dining out is all about

Ever since I was a kid, serving food and drink was my passion. Hosting was so gratifying.

The restaurant business relies on pleasant, attentive staff serving great food. It’s a total experience. The staff interaction should be informative. Servers are there to take care of the diners’ needs and make them feel a bit pampered. It’s usually reflected in the price, but this wasn’t the case in the USSR on both notes.

So, the unforgettable dining episode that qualifies as my most bizarre experience was deep rooted in my perception of what service is all about.

Dining in one of Moscow’s finest hotels

This is service in a fine dining restaurant?

This incident occurred when I was in Moscow on a 1978 backpacking trip through Russia. The dining room was in the Hotel Ukraina, an upscale hotel on the Moskva River in the city centre that catered to foreigners.

I sat at a table with three European businessmen. I was warned by one of them about the impending service. Or should I say, the lack of.

You’re going to wait, so get used to it

He told me that in Moscow it took a week to do what would normally require a day’s worth of meetings in Western Europe. The longer they stayed, ate, and drank, the more foreign currency was spent.

Service behind the Iron Curtain left much to be desired, but this was Moscow, a world class city. The restaurant was supposedly fine dining. Remember, this was a superior hotel catering to worldly business people and officials.

Service was beyond slow, bordering on non-existent. Expectations when dining out in an upscale restaurant is that there will be great service with great food. Sour-faced and grumbling servers seemed the norm, though. Further, they appeared so bored and generally ignored us. Was there another dining area reserved for the important diners where the service was proper? I don’t think so.

The food wasn’t the problem

The food was still very good, although not exceptional, as I dined on red caviar and beefsteak. Enough about the positives. Not only was the beer warm, but we also received our appetizers after the entrée. The level of service would not have been acceptable in a gulag. Maybe they resented foreigners.

Was this a mirror of the oppressed society under the Soviet Union? I expected this in Siberia, but not in a fancy restaurant in Moscow. Despite this, the food overall throughout the rest of the trip was quite good.

I tried to wrap my head around this

What I found most unsettling was that everything I had learned, understood, and loved about dining out was the importance of service. Especially in a fine dining restaurant. Even if the server lacked detailed knowledge of the menu items, service was expected to be helpful and pleasant. My Moscow experience went against everything I expected and held close to my heart.

Prices were cheap based on the ruble. I dined on beefsteak throughout the trip for just over one ruble, but the $US exchange rate to ruble while in Russia was outrageous. One USD would get about one ruble whereas the exchange rate on the World Market was something like 35 rubles to a US dollar. This is how the Soviets acquired the much sought-after foreign currency. To further demonstrate the craziness at the time, I sold my blue jeans for 50 rubles back in Siberia on the Black Market. That provided me with lots of spending cash for the trip, although I tipped with sticks of Wrigley’s Juice Fruit gum. Better than rubles. And much more interesting.

My confidence in fine dining resurged

“Well, the Ukraine girls really knock me out.”

Ironically, this unfortunate experience was contrasted with one of my most memorable meals a few days later. It was a great Ukrainian buffet breakfast in Kyiv for one ruble. And the service was excellent. Being that my ethnic background is half Ukrainian, I thoroughly enjoyed the food and service and dined on dishes that my relatives had never made at home. I was probably biased. I even married a pretty Ukrainian girl from my home town. And I can’t believe that I didn’t note the specific dishes in my diary for future reference.

My other ethnic half is mostly Irish and I do enjoy a pint. Unfortunately, I didn’t visit my other homeland during this trip.

Not bizarre dining, but definitely strange

I did have two food tastings that were strange to my Western palate and warrant mentioning. Both occurred on this extensive trip. Go figure.

The first was at the home of a lovely widow named Teiko who befriended me as I tried to get my bearings in Fukuoka, Southern Japan. Her maid prepared raw sea cucumber (sea slug) marinated in orange juice and soy sauce. The texture was rubbery and chewy, although I still enjoyed it. Healthy eating, too.

The second meal that stuck with me was on a Russian ship sailing from Yokohama, Japan, to Nahodka, USSR. I was served boiled bacon for breakfast. Boiled! After being violently seasick the night before, this was cruel. Getting seasick is not unusual on the open sea and this seemed to be a mean trick by the crew. However, it was freaking cold, and I needed the calories. I was open to almost anything to eat by then. Actually, it wasn’t half bad.

There are many factors that can affect the dining experience. The food, service, location, atmosphere, or environment all play a part. Dining out can encompass some strange situations and it can only add to the recollections of the good, bad, and bizarre.